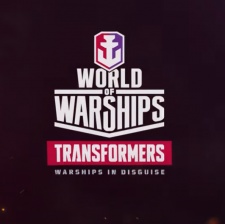 Wargaming has teamed up with toy manufacturer Hasbro to bring popular toy franchise Transformers into World of Warships.

Four popular bots from the toy/tv/movie franchise will be introduced to the MMO as brand new ship skins. Optimus Prime and Bumblebee will represent the Autobot end, while Megatron and Rumble themed ships will represent the Decepticons.

Sadly, the ships do not transform as they do canonically - they'll just be regular old battleships piloted by your chosen shape-shifting bionic boy.

The update will 'roll out' in September, according to the press release. It also states that the four chosen robots are just the beginning, as the collaboration "will also bring a host of other new content, including special Transformers containers, dedicated in-game Combat missions, camouflages, commemorative flags and patches, and more".

A new trailer from World of Warships showcases the new skins in action.