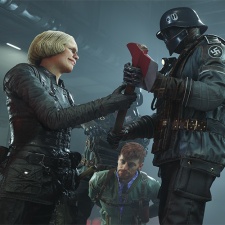 Wolfenstein: The Board Game has surpassed its funding goal on Kickstarter.

So far, the board game adaptation of Bethesda's shooter has earned $598,361 from 4,301 backers. Archon Studio, the company behind the tabletop title, initially asked for $50,000. The campaign ends in just under two days.

"Join the resistance in an alternate reality where the Allies lost World War II and the Nazi's dominate the world," reads the game description.

"Those who break the Nazi's rules or speak out against the Reich are silenced, many never to be seen again. For captured resistance fighters, punishment is swift and brutal, and none have lived to tell their tale."

Over 36 stretch goals have been reached, and these include various expansion packs, miniatures and accessories.

Multiple video games franchises have been adapted into board games. These include Dark Souls with various expansions, BloodBorne, Resident Evil 2 and The Witcher.

In February, Bethesda chose to remove its games from Nvidia's GeForce Now service. However, Wolfenstein Youngblood – the latest in the series – remained on the streaming platform.