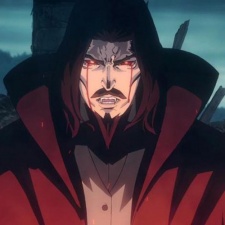 Netflix's Castlevania animated TV series has been renewed for a fourth season.

As announced in a blog post, show creator Warren Ellis revealed that season three "did, really, shockingly well." It out performed the previous series which in itself did well enough to secure future episodes.

The popularity of season three was further shown in its appearance in the overall Netflix Top Ten list.

"So we’re on for season 4. We don’t expect too much of a covid-related delay, but if that one guy who keeps tagging me on IG to demand “season 4 NOW” could fuck off, I’d appreciate it," said Ellis.

"Four seasons of an Anglophone adult drama animation about vampires, moral philosophy and toilet paper. Which is not a niche production, but something with an audience of (stops, sees Netflix sniper rifle dot) many, many millions. Who saw that coming? If it turns out that this weird thing is what prised open the door on doing adult-oriented drama narrative in English language animation, I would be delighted.

"Because we just proved that the audience is there, in the same numbers that show up for live-action drama."

The third season hit Netflix on March 5th. However, it was rumoured to be returning in December 2019, director Samuel Deats put those rumours to rest.