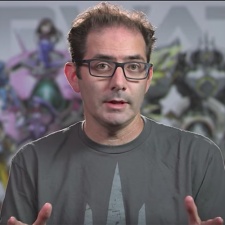 If Overwatch game director Jeff Kaplan (pictured) could choose any in-game hero to be, he would choose Mercy.

Speaking to PCGamesN, Kaplan explained that he would choose the character for her healing capabilities. More specifically, he would use those gifts to heal everyone who has contracted Covid-19.

"I would be Mercy, and I would healing beam everyone with coronavirus," said Kaplan.

Garnet added: "That's a really tough one. I mean honestly, it would be cool to fly but it seems like a cheap response to say Echo. I think it'd also be really cool to Earthshatter with a rocket hammer too.

"But as far as a sheer ability, shooting dragons out of an arrow would be awesome. Even though I'm the worst Hanzo player ever, to shoot a giant mystical dragon that melts people would be pretty cool."

The Covid-19 has wreaked havoc across the world, a number of companies and individuals front the games industry have made donations to help fight the disease. Namely, Riot Games has given $1.5 million to relief efforts in Los Angeles.

Further financial aid has come from Ndemic Creations and pro streamer Ninja, they donated $250,000 and $150,000 respectively.