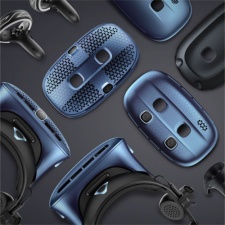 “Our customers want an incredible VR experience, and we are proud to announce a new family of products tailor-made for VR use-cases of all types,” said Yves Maître, CEO, HTC.

“Vive Cosmos is truly the most versatile headset yet. From consumers just discovering VR for the first time to the demanding business user, Vive Cosmos offers stellar quality, comfort, and the ability to evolve VR and XR journeys over time – from changing faceplates to adding options like wireless.”

Vive Cosmos Elite comes with pre-installed external tracking faceplate, two SteamBR base stations and two Vive controllers. The complete Elite bundle will retail for $899, and it is expected to launch by the end of quarter one. Pre-orders are available for the Elite on February 24th.

In Q2, the external tracking faceplate will be sold as an individual accessory for Vive Cosmos and Vive Cosmos Play. It will cost $199.

Vive Cosmos XR is a stand-alone edition and faceplate for Vive Cosmos. For the first time, it offers XR passthrough cameras to the hardware. More details on the Cosmos XR will be revealed at GDC 2020.

The Vive Cosmos Play has been designed as an introduction for those new to premium VR. It utilises four cameras with inside-out tracking, games such as Angry Birds VR: Isles of Pigs is recommended for the system. More details will be announced about the Play model over the next few months.

The current Vive Cosmos model uses six inside-out tracking cameras and can be purchased now for $699. However, the six-camera faceplate will be available as a stand-alone accessory in Q2 for $199.

In August 2019, the Oculus Rift took over the HTC Vive as the most popular VR platform for developers.

The Size Of The VR Consumer Market (Updated, 3rd March)