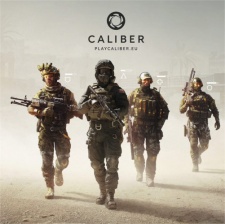 The game – developed by 1C Game Studios – has already attracted one million users following a test in former Soviet Union countries. In total, the player-base has taken part in more than 53 million battles.

Caliber has both PvE and PvP options, with teams of four battling it out. Teammates get to choose their operator roles, the positions are accurate to real-life forces such as the US Navy Seals. Though the title is clearly inspired by the likes of Counter-Strike and Rainbow Six: Siege, with the CEO of Wargaming Victor Kislyi telling PCGamesInsider.biz at Gamescom 2019 that it is for an older audience and isn't quite as "twitchy" as other products on the market.

“We are very grateful to our audience for the great reception to our game in CIS, and look forward to player base growth in Europe," said Wargaming's Alex Morozov, who is the marketing director for Caliber.

"Beginning from our demo at Intel Extreme Masters Expo in Poland, we will start recruiting players that will then join us in Caliber testing when the game becomes available later on this year.”

European players will receive content such as collections and stories, more maps will also be added.

“We will make sure that players in Europe get as much content as possible, with more collections of operators from different countries, more maps, and a story that would bring more context into their gaming experience," said Caliber product director Kirill Stadnik.

In December 2019, Wargaming opened its new studio in Guildford. We caught up with studio director Sean Decker to find out why the company chose to have its new office in Surrey.