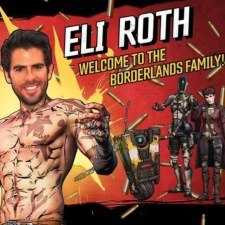 It would seem that Eli Roth is making a film based on Gearbox Software's Borderlands series.

That's going by a – now-deleted – tweet from the studio's boss Randy Pitchford, as reported by Kotaku, in which he welcomed Roth to the project, which is being created by Lionsgate and Arad Productions. The film was announced in June 2019. Roth is best known for his directorial work on Cabin Fever and Hostel, as well as his appearance as Donny "The Bear Jew" Donowitz in Quentin Tarintino's 2009 World War Two film Inglorious Basterds.

Pitchford promised more details about the film at Pax East on February 27th.

The tweet was quickly deleted, suggesting that it was announcing the news too early. It's also possible with fears about coronavirus that some of the parties have pulled out of Pax East, as Sony has already done. Health concerns lead to the cancellation of Mobile World Congress in Barcelona, which was set to take place between February 24th and 27th.

More details about the Borderlands film comes in the wake of Borderlands 3 launching in September 2019 with the title going on to have 248,000 concurrent users in its first 48 hours on launch – supposedly double the record of Borderlands 2. Meanwhile, publisher 2K revealed that it had shipped five million copies of the game ten days after its launch and that this cashflow had pushed the franchise's lifetime revenue over $1bn. We caught up with senior producer Anthony Nicholson in the wake of Borderlands 3's launch to find out more.