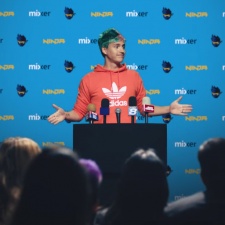 That's according to the CEO of talent agency Ader Justin Warden, who told CNN that the Big M offered Blevins tens of millions to come exclusively to its streaming service. Microsoft and Loaded, Blevins' agency, haven't confirmed these details.

In 2018, Blevins claimed that he had earned around $10m as a streamer on rival platform Twitch where he had 14 million followers. Now on Mixer has 2.8 million fans, but he has become something of a flagship name for Microsoft's streaming platform.

The personality is best known for broadcasting Epic's battle royale giant Fortnite and even played it with Star Wars actor Mark Hamill in the build-up to the launch of Rise of Skywalker in December last year.

Ninja also was the inspiration for a skin in the game, part of Epic's Icon Series of cosmetics.

Though no doubt the biggest personality to make the leap to Mixer, the Big M has also nabbed Michael "Shroud" Grzesiek, best known for his insane Playerunknown's Battlegrounds streams.