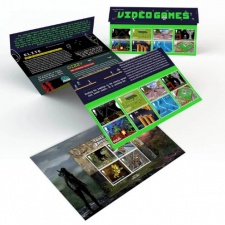 UK postal service Royal Mail is rolling out a set of stamps depicting iconic video games from the British Isles.

The pack contains a total of 12 stamps, with eight featuring Frontier's Elite, Dizzy from The Oliver Twins, Populous, Lemmings made by DMA Design - which went on to become Rockstar North, Codemasters' Micro Machines - not strictly a video game franchise but still an iconic brand in the sector - football title Sensible Soccer, Psygnosis' WipEout and Worms from Team17.

Then there's a separate four-pack featuring the Tomb Raider IP, which was created by Eidos.

Incidentally, four of the brands that have been featured in this set were created in part by people who have received honours from the Queen. Frontier Developments founder David Braben was made an OBE in 2014, while Team17 boss Debbie Bestwick received an MBE in 2016 and Populus developer Peter Molyneux was granted an OBE back in 2004. Meanwhile, former Eidos boss Ian Livingstone was appointed an OBE in 2006, before being elevated to a CBE in 2013.

EA has outbid Take-Two for Codemasters