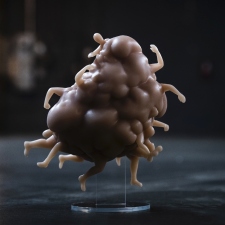 It's been a few years now since developer Playdead released 2016's Inside, the follow-up to indie smash hit Limbo.

At the start of 2018, the studio revealed that it was teaming up with merchandise firm iam8bit for a special edition of the title, with that firm apparently teaming up with sex doll maker RealDoll to make part of this, um, package.

“If you think about it, every game has its core legacy ‘thing’,” iam8bit co-founders Amanda White and Jon M. Gibson told Polygon.

“Zelda has its triforce, Sonic has its gold rings, and Inside has its Huddle. That mobile, wiggly mass of fleshy human bits isn’t just a crescendo climax in the story, but also the thing that absolutely sticks with you after the experience is over. During the early stages of brainstorming, there was absolutely no question.”

RealDoll co-owner Michael Wilson added: “We knew from the get go that it had to be fleshy. We use many different proprietary mixes of silicone for our products already and have 22 years of experience changing out additives to achieve feel, stretch, softness, and durability. It was a long process of pouring up several different silicone tests and sending them to PlayDead for approval to find the best of all the aforementioned characteristics.”