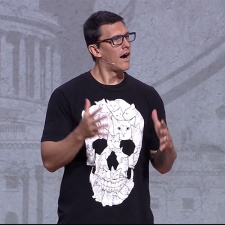 Another day, another video game property coming to the silver screen.

This time it's Tom Clancy's The Division, which Ubisoft Red Storm's creative director Terry Spier (pictured)( revealed at its E3 press conference yesterday was being made into a film in a collaboration with Netflix.

Jake Gyllenhaal and Jessica Chastain of Molly's Game, The Martian and Interstellar fame are set to be in the starring roles. This of course isn't the first time that Gyllenhaal has taken a lead part in a video game film, or even one based on an Ubisoft property, after he starred in 2010's Price of Persia: The Sands of Time.

This wasn't the only venture into film and TV on-stage at Ubisoft's show. It's Always Sunny in Philadelphia's Rob McElhenney showed off his new show for Apple TV, Mythic Quest: Raven's Banquet, made in collaboration with Ubisoft.

The Division joins the long list of game-to-film adaptations that are on the way. There's of course Sonic, Minecraft - which McElhenney was initially directing - Uncharted, Monster Hunter and that Tom Hardy Splinter Cell film which is in a weird limbo.

Oh, and that Chinese-America Tetris production which was extended from a single film to a full-on trilogy as there was "too much story" for just one movie. That better be a blockbuster!

Ubisoft is making a film about old people playing esports