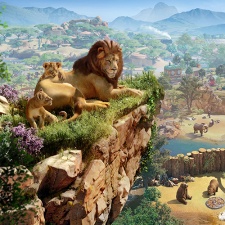 Cambridge-based games firm Frontier Developments announced its latest new IP yesterday, Planet Zoo, but this is one of nine trademarks with 'Planet' in the name filed by the company in the last 13 months.

The Elite Dangerous and Planet Coaster maker has filed eight other 'Planet' brand names - Golf, Railway, Soccer, City, Hospital, Prison, Racing and Transport. These, along with Planet Zoo, were filed and registered with European IP body EUIPO on March 29th, 2018.

All nine trademarks were also filed with the United States' patent authority USPTO on September 27th, 2018 and are pending approval.

There's also a Planet Safari trademark, which was filed and registered with European IP body EUIPO back on August 14th 2015, incidentally the same date that Frontier filed and registered the Planet Coaster name. It's entirely possible that this was an early name for what is now Planet Zoo.

Frontier might never make games using any of these brands and is simply safeguarding its future - companies often file patents and trademarks for projects and tech that never makes it to consumers.

Planet Zoo is likely the fourth IP that Frontier mentioned was in the works in its financial report for the six months ending November 30th, 2018. The title is set to launch this autumn on PC.

"This is the zoo management game we’ve wanted to make for many years," Frontier chief creative officer Jonny Watts said about its newly-announced game.

"We’ve challenged ourselves to build on the games we’ve made before and to carry the great legacy of classics like the Zoo Tycoon series forward. We’re taking everything we’ve learned from our past work and focusing on modern values – incredible authenticity, rich management, limitless creativity and community sharing – to make our best-ever simulation game. We hope you’ll join us when Planet Zoo launches later this year."

It's easy to see why the Cambridge developer and publisher might be considering honing in on this management style of game. As of January 2019, both Planet Coaster and Jurassic World Evolution had sold over two million copies. The former was released in November 2016, while the latter was launched in June 2018.

We caught up with assistant marketing director Zac Antonaci to discuss the success of Jurassic World Evolution in September 2018.