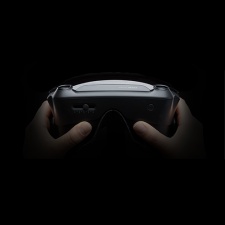 Virtual reality might not have set the world alight when it finally launched in 2016, but Valve is clearly still interested in the technology.

The games giant has started teasing a brand new headset called the Valve Index. There's not a huge amount to go on just yet - in fact, just a store page with a single image of the tech. But as spotted by Eurogamer, there's the text "Upgrade your Experience. May 2019" in the pages source info.

The hardware on show in the images is a match for a prototype image that was doing the rounds last November.

In fact, Valve filed a series of trademarks for 'Valve Index' in December 2018 with American and European IP bodies USPTO and EUIPO.

That's on top of a patent for an 'Electronic controller with finger motion sensing', which was filed on December 20th 2018. Per the filing, this is to be used with a virtual reality system and features tracking technology.

This is a continuity of another patent, 'Electronic controller with hand retainer and finger motion sensing' filed back on June 16th, 2017.

Valve isn't the only company who is trying to keep the VR market alive. Oculus has two headsets on the way, the all-inclusive Quest and the PC-powered Rift S, while HTC unveiled its Vive Focus Plus in late March. Oh, and PlayStation has made a number of patent and trademark filings with VR in mind recently, too, as has Apple.

For its debut Valve VR headset, the Vive, the PC giant teamed up with HTC. This time around it looks like the Index is an in-house job.