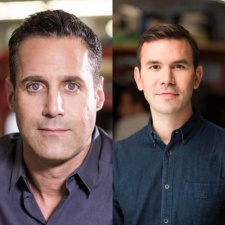 Virtual reality specialist Oculus has said that Facebook's 2018 ever-waking PR nightmare has had no impact on its business.

That's according to VP of AR and VR partnerships and content Jason Rubin (right) and co-founder and VP of product Nate Mitchell (far right), who PCGamesInsider.biz raised this topic with in a GDC roundtable following a demo of the firm's newly-announced Rift S headset as well as the previously-revealed Quest HMD.

"Well, I can tell you that nothing has changed internally about our desire to bring VR to the masses or with regards to the amount of investment that Facebook is making in AR and VR," Rubin said.

"I now work across both of those so know those investments. In fact, it's ramped up. So we are intent as a company to push forward in AR and VR and drive it into consumers' hands, because we think it'll make the world a better place and eventually a lot of people are going to be using these devices everyday to communicate with friends. So, companies go through moments. It has not in any way impacted anything that either Nate or I do on a day-to-day basis."

Pressed on whether the Oculus brand had faced any negative fallout externally due to its association with Facebook, the VR firm pointed to "very solid" performance on both Facebook and its Instagram picture app.

"We are, as a brand, a very different thing than Facebook and people have a great amount of joy playing these devices. I don't know it's going to make a difference."

Mitchell added: "You should ask consumers. We're very biased being part of Oculus and Facebook. But we think people are going to love the devices when they get their hands on them. But we'll see."

Facebook bought Oculus for $2.3bn back in 2014. At the time, this was seen by many as a massive boost for virtual reality as a technology.

Oculus has announced that it has another Rift headset in the works - the Rift S - alongside the previously-announced Quest HMD. Both have an RRP of $399, but the former is a more powerful PC-powered bit of hardware, compared to the Quest's wire-free experience.