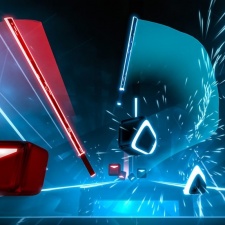 Valve has been forced to push an update to SteamVR after players were found to be flicking their arms at inhuman speeds.

Beat Saber is a rhythm game that sees players pop on a VR headset and use their motion controllers to slash moving blocks with laser swords to music. In faster, Zen-like moments, some players were moving their wrists fast enough to flag warnings on SteamVR’s tracking system.

When designing the tracking system, Valve made a number of assumptions based on how the hardware would be used - some of which were determined based on the presumed limitations of the human body.

“For example, if our math says you are behind your only base station, clearly we made a mistake because we wouldn’t be getting any signal from behind the base station.

“One of these checks relates to how fast we thought it was physically possible for someone to turn their wrist. It turns out that a properly motivated human using a light enough controller could go faster (3600 degrees/sec!) than we thought.”

Beat Saber players should now be free to whip their wrists at speeds thought beyond human possibility, without fear of SteamVR lagging behind.

Valve has changed how soundtracks work on Steam

Steam is now selling game soundtracks on their own