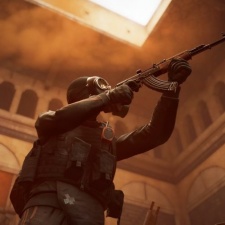 Insurgency: Sandstorm takes its first shot at a crowded conflict atop this week’s Steam Top Ten.

New World Interactive’s latest iteration in its realism-driven multiplayer shooter opened fire at No.4 this week, just one spot below the Year 4 content pass for gun-toting contemporary Rainbow Six: Siege.

Business has taken a bit of a dive for Stellaris: Megacorp, which took the top spot last week. The space civilisation sim lands at No.5 this week. While we’re still in the stars, No Man’s Sky soars back into the Steam Top Ten at No.7 thanks to a 50 per cent sale this weekend.

Back on Earth and coming from the same publisher as Insurgency’s bombast, Farming Simulator 19 keeps trucking along, up two spots at No.6.

Kingdom: Two Crowns brings a new co-op campaign to Coatsink’s side-scrolling monarchy, settling in at No.8.

Finally, Monster Hunter: World slips a few spots down to take ninth place this week. A wholly different kind of wilderness, Tom Clancy’s Ghost Recon: Wildlands closes out the list thanks to a 65 per cent discount.

Below is the Steam Top Ten for the week ending December 8th.