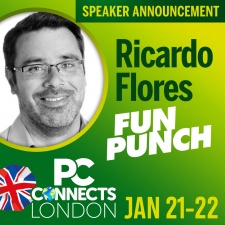 Portuguese developer Richardo Flores from Fun Punch Games, the studio behind Striker's Edge, tells us about his journey into game development.

Fun Punch Games is an award winner and many time nominee indie studio based in Lisbon. With a mix of senior and young developers, we are platform and engine-agnostic delivering A to Z game creation on mobile or console. Big focus on the gameplay mechanics and loops. Strong on art direction and even stronger on problem-solving.

Real-time strategy multiplayer game Strikers Edge is our only published title for now since we have been working on a couple of other titles for other dev teams.

I'm responsible for biz dev, as well as managing the production schedules and deadlines.

I guess it was a childhood dream? I started by owning a video games store back in the 90s, starting developer web and Java games and later evolved to working in production and biz dev. Why? Because I love how this industry works and how creative we can be as a media.

Scope, there are many talks and lessons about it, but scope it's the major hurdle for those that are starting in the industry. Your team real development capacities vs what you want your game to be. Ad to that the development timeline and the time to market opportunity and you will have already a complicated equation. From what I learn it's better to fail fast and learn, so make it, launch it and evolve to the next level.

Fortnite? It was there to happen already last year but this last 12 months it shaped how we now think on Battle Royale games, free to play cross-platform games and new monetisation and stores models. It brought a new flavour of hardcore gaming to the mobile and the "magic" of free-to-play to consoles. It also proved the Influencers power to marketing you actions and new game content.

More hardcore games on mobile, I believe that this niche will get bigger. More free-to-play on the console and PC side. 2019 will be that gap year where we will be waiting for the new consoles generation. AR game will continue to evolve and I would love to finally seed a killer game working on it.

A lot and not so much there are cycles. But I would say that today we can focus more on the gameplay and the experience and not so much on the technology. The actual engine philosophy gave more liberty to artists and game designers.

Connects is the best networking event you can get. Content wise I'm looking for all things about the new stores and platforms. Connects X track is one to follow