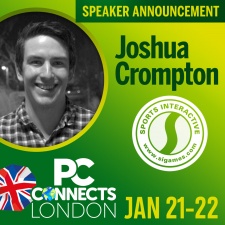 Today, programmer Joshua Crompton from Football Manager maker Sports Interactive shares why he wanted to get into the games industry and what advice he has for people who want to do the same

Sports Interactive was founded in 1994 and is best known for producing the Football Manager series of games. The studio has over 100 full-time SI employees, with over 40% having worked there for more than 10 years. Over the past 24 years, Sports Interactive’s games have achieved both commercial and critical success – breaking records for the most weeks at number one in the UK PC games chart, and have won a number of awards from across the world.

I am a generalist programmer on the Match Team, working across a wide variety of areas of the Football Manager codebase, including animation, AI, gameplay, and tools. This means my time is roughly divided into the adding bugs phase (and hopefully some features too), and then the fixing bugs phase.

Games are an amazing creative and cultural medium, where the user has agency and input into the worlds and stories that games create. For me, that is what the games industry relatively unique, creating meaningful and emotional experiences for users, which was something that I wanted to be a part of.

First and foremost, be kind. The games industry is a fun industry to work in, with some amazing people, and it's a lot easier to work with people if they're actually a nice person. In terms of programming, learning about how to write performant code (particularly data-oriented design), as well as learning the basic data structures and algorithms, is very helpful. You should make sure you research the company you are applying to beforehand, to make sure you brush up on the sort of knowledge they are after.

The past 12 months have been a great year for the games industry, with the release of some truly exceptional titles such as Red Dead Redemption 2, Spider-Man, and God of War. The UK industry has continued to grow and punch well above it's weight on the global scene, even amidst the backdrop of Brexit. Personally, I've enjoyed the slow but continued rise of empathy and emotion based design featuring in games.

We'll continue to see a strong lineup of games being released as the console cycle hits it's peak, and with the introduction of the Epic Games Store, we could really see a shake up of the PC Market.
Brexit will continue to have an impact on the UK games industry as it ramps up towards and continues beyond the leave date.

The biggest change for me has been the technical advancement in the time I've been in the industry. Games are approaching a level of graphical finesse and immense scale that is making them incredibly polished experiences. There's also been the emergence and explosion of new technologies, such as AR and VR, as well as the continued rise of mobile and the free-to-play/microtransaction models of games.

I've heard my talk is going to be spectacular