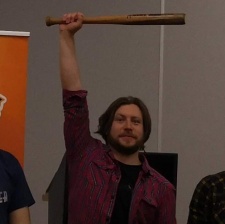 Last year we travelled to Poland for the first time ever. What's more, we not only took our mobile focused Big Indie Pitch with us, but we also took our brand new PC focused PC Indie Pitch too. Now one year later and we're back in Poland in order to once again shine a light on one of the strongest PC markets in all of Europe.

Teams get the opportunity to get valuable feedback on their games, as well as win great prizes such as promotional packages and, more importantly, the coveted PC Indie Pitch bat, a prize that developer Hyperstrange walked away with this year for their game Elderborn, defeating a whopping 22 other developers in the process.

They weren't the only developer that walked away with a prize though, as Black Mouse's Profundum was awarded the prize for second place, with Ammumancer by Game Slingers rounding out the top three.

Read on to learn more about Elderborn, alongside the two games that walked away with our prizes for second and third place.

Taking a massive amount of inspiration from the likes of Dark Souls and Doom, Elderborn is a skill based hack and slash, one infused with ancient heavy metal melee combat. Sick of modern gaming mechanics Hyperstrange hope to appeal to those who are looking for a bit of old school gaming with their hardcore offering. So, prepare for devious hand crafted dungeons, hard as nails enemies, brutal combat, and a gameplay experience that defintiely isn't going to hold your hand.

Profundum is virtual reality adventure puzzle game set within a amazingly stylised steampunk world. The gameplay itself encourages players to manipulate the world around them to not only solve physical puzzles, but also in order to move through the world and discover the game's story. As such, expect a lot of interaction and involvement, including natural interactions with objects like ropes, gears, chains and of course, steam pipes.

Game Slingers' Ammumancer is a one player card based twin-stick shooter infused with hidden object and puzzle elements. Yes you read that right. It sounds like quite an eclectic mix, and one that shouldn't work. However, not only does the mix of genres work well, but it all gives the game a very unique and interesting feel. Combine that with dynamic pixel art, a world and story inspired by noir detective novels, and of course mages, and you have one incredibly intriguing game.

Want to show off your exciting new game? We host Big Indie and PC Indie Pitch events throughout the year, so be sure to keep an eye out on our events page for an event near you.