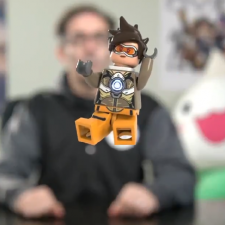 Overwatch director Jeff Kaplan has given fans their first look at Overwatch Lego.

In a brief skit on the Overwatch Twitter account, a rather stony-faced Kaplan assembles a Tracer Minifigure and observes, gaze unflinching, as it comes to life and bounces around the screen.

Blizzard first teased a collaboration with Lego way back in May. In an equally short video, we saw the fuzzy blue outline of Tracer joined by Widowmaker, Zenyatta, Genji, Mercy and McCree.

The official website for Overwatch Lego also hints at an appearance from Winston, sparsely decorated as it is with small plastic bananas and peanut butter jars.

Blizzard has been aggressively capitalising on Overwatch's popularity, with Funko Pops, Figma and Nendoroid figurines already on market. A line of Nerf products, Overwatch Rivals, is due for release in 2019.

Lego is still pushing the payload on its Overwatch collaboration, with no release date yet revealed.