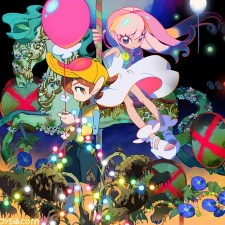 Two creative leads behind the Zero Escape and Danganronpa series’ have founded a new indie studio.

Kotaro Uchikoshi and Kazutaka Kodaka announced that they had formed the seven-person Too Kyo Games during a Famitsu livestream yesterday.

During the stream, the team announced that Too Kyo currently has four new, unnamed projects in development. At least one will follow a similar setup to the Danganronpa and Zero Escape games - an unwilling cast caught up in a twisted, fatal scenario.

Two other game projects include a cyberpunk title for Zero Escape and Danganronpa developer Spike Chunsoft - no hard feelings, then - and another "very shocking" death game, sporting a deceptively upbeat art style (above).

Finally, Too Kyo is working on a 90’s action-inspired anime series alongside Studio Pierrot. The unnamed series will be written by Kazutaka Kodaka and is looking at films like "Pulp Fiction" and "The Professional" for inspiration.

No release dates have been given for any of Too Kyo Games’ projects.