Update: NCSoft and Carbine's MMO WildStar has been shut down 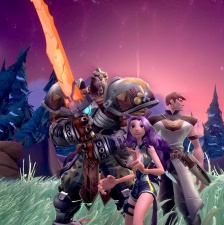 A brief message on the game's website has now-closed developer Carbine Studios expressing their gratitude to the users who stuck around with the would-be-WoW.

"Unfortunately, Carbine Studios has recently closed its doors and WildStar has discontinued service," the firm said.

"Carbine would like to thank all of the players who made planet Nexus such as special place of the last four and a half years. We will always remember you."

Update (September 27th): Carbine has confirmed that Wildstar will be taken offline on November 28th.

"We are truly grateful for the vibrant community that grew around WildStar, and for all of your support throughout the life of this game," said the studio, posting on the Wildstar forums.

"Unfortunately, as you may have heard, those adventures are coming to an end. It’s never easy to say goodbye to something, especially something that has meant so much for so many—but the WildStar game service will close on November 28, 2018."

Carbine also confirmed that in-game purchases made since July 1st 2018 will be refunded by next week. Those who bought the game through Steam after that date will also have their purchase refunded.

Founded by former World of Warcraft developers, Carbine was best known for its only title, 2014 MMO Wildstar. The studio hoped Wildstar would appeal to a hardcore audience the Blizzard MMO had left behind, complete with the 40-player endgame raids of Warcraft’s prime.

But while it found its own audience, Wildstar was never the behemoth NCSoft hoped it would be. The game switched from subscriptions to free-to-play in May 2015. Half a year later, half the team was laid off due to performance and the cancellation of a Chinese version.

“Today, we are closing Carbine Studios and will begin the process of winding WildStar down to ultimately shutter the game,” said NCSoft in a statement, reported Kotaku.

"We are also in the process of identifying the teams that will be doing the work to bring WildStar to a close. These decisions are very difficult to make and we are in the midst of shifting as many of our teammates as possible into other roles within the organisation."

NCSoft also stated it will refund any in-game purchases made since July 1st 2018. Carbine’s closure was made effective on September 7th.

Rock Band firm Harmonix has teamed up with NCSoft