Fortnite Monopoly is dropping in stores this October 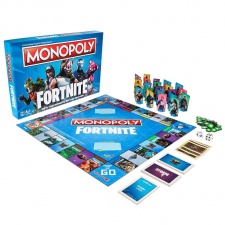 A Fortnite version of Monopoly is due to drop on October 1st.

The date was announced in a tweet from creative director Donald Mustard (below), alongside a high-resolution image of the board and components.

The existence of Fortnite Monopoly was initially leaked by UK retailer Zavvi, who removed the item a few hours later. The site listed a price tag of £26.99 (around $35), but claimed a release date of November 26th.

Interestingly, it seems the Fortnite edition of Monopoly is more than the usual thematic reskin. Using the mechanics of the Hasbro classic, the game appears to try and give Monopoly a faster-paced, last-player-standing feel with an encroaching storm and limited hit-points.

Monopoly has always found a way to include pop culture crazes into its relatively simple property-management frame - from The Simpsons to - bizarrely - Warhammer 40,000. Fortnite’s explosive success has propelled developer Epic Games to a valuation of $8.5 billion. It is only natural others are looking for a slice of that pie.

Thrilled to show you the final art and game board for Fortnite Monopoly! It’s so so fun and such a unique spin on the classic game mashed up with last player standing Fortnite. In stores Oct 1st!!! pic.twitter.com/aNqJmvfpb2