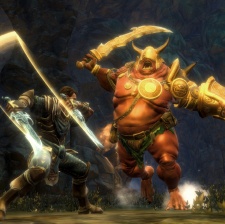 The publisher announced that it had acquired the rights to the RPG Kingdoms of Amalur. Despite critical acclaim, 38 Studios’ only release wasn’t able to keep the company afloat. 38 Studios collapsed mere months after the game launched.

THQ Nordic found itself with more than just a cult-classic RPG, however. The deal includes the right to Project Copernicus, 38 Studios’ unfinished MMORPG. In an interview with Boston Magazine - reported by GamesIndustry - Copernicus was to be “the first triple-A, hundred-million-dollar-plus, free-to-play, microtransaction-based MMO.”

Kingdoms of Amalur wasn’t a success for its initial creators, but it had its fans - it’ll pay to see what plans THQ Nordic has in store for the property.

In spite of THQ proper’s very public collapse, THQ Nordic is quickly establishing itself as a new publishing powerhouse having purchased the THQ name as well as a bevvy of IP from both that publisher's 2013 fire sale and further afar.

The firm has roughly $316 million in liquid capital to continue making high-value purchases.

Amalur isn’t even the only old franchise to be snapped up by the growing European publisher. Deep Silver parent company Koch Media - itself a subsidiary of THQ Nordic - recently acquired the rights to classic first-person shooters Timesplitters and Second Sight.

Oh, and THQ Nordic currently has 51 titles in the works, 20 of which are not yet announced.