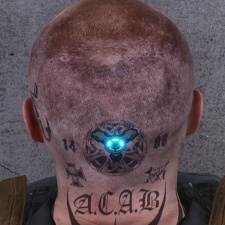 Through a supporters pack for the game, players could purchase a number of cosmetic tattoos to customise their convict. Following the game’s setting as a televised prison bloodsport, these were based largely off real gang signs.

Some of these designs - namely, an iron cross and the numbers “14 88” - are explicitly and extensively used by real-world Neo-Nazi groups. The developer has since removed these images from the game and social media messaging.

Speaking to Polygon, publisher Devolver Digital issued an apology regarding the white-supremacist imagery.

“We do not agree with use of this symbology or any hateful content, regardless of intention.

“The use of the tattoo was intended to assist in portraying a realistic element of prison culture and the horrid elements within it. This content has been patched out as of this morning, and Devolver Digital are currently conducting a full review of all assets and content in the game with Gamepires.

“We strongly condemn any and all use of hateful symbology in our games and agree it should have never been in the game regardless of creative intent or realism. Devolver Digital apologizes unreservedly.”

The statement follows a rather impassioned initial response from a manager at Croteam Incubator, complaining about “offended” parties. Rather than acknowledging player concerns, the Steam thread was locked with a comment placing all blame on complaining parties.

"If you are offended by some textures in the game, please don't play the game,” said marketing and community manager Zenoslaf.

“Because if we start removing things that hurt someone's feelings, it will be an empty game, with no people, no weapons, no blood, no humour, no [expletive] pooping, killing others, eating human flesh, killing animals."