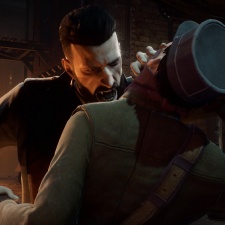 Dontnod’s action-RPG Vampyr has landed a TV series thanks to a deal with 21st Century Fox.

The media giant has optioned a Vampyr television series, to be produced with Wonderland Sound & Vision and dj2 Entertainment. The latter is a company specialising in video game adaptations and is working on the 2019 Sonic the Hedgehog movie. It is also working on bringing Dontnod’s flagship IP, Life is Strange, to television.

“We believe it is a fantastic premise for a television show,” said Dontnod CEO Oskar Guilbert in a statement.

“This is a new and exciting way for fans of the game, as well as the uninitiated, to enter and engage with Vampyr's rich, deep story.

“We cannot wait to see how the talented team at Fox21 will bring out the darkly atmospheric universe of our game into television.”

DJ2 CEO Dmitri Johnson added: “The DJ2 team loves the creative vision Dontnod & Focus devote to all of their projects. The great relationship we’ve built with them since partnering on their incredible game, Life is Strange, allowed us to get on board for Vampyr well before its release.

“Like them, we’re excited to collaborate with our friends at Fox21, Wonderland, and the rest of the creative team we’re assembling.”

Vampyr performed well for the studio, selling over 450,000 copies just over a month after launch. Publisher Focus Home Interactive has no plans to support the game with post-launch content, but isn’t shy of sequel-talk if the game continues to perform.

Dontnod is getting into third-party publishing