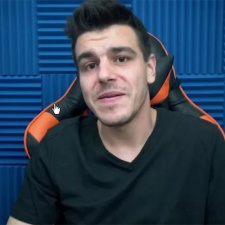 Disgraced games journalist Filip Miucin has released a video in which he tried to tell his side of the Dead Cells review plagiarism saga.

In a now-deleted video - yep, off to a good start - the ex IGN Nintendo editor claimed that he did not intend to copy another person's work. He went on to apologise to his former colleagues at IGN, who have come under fire for Miucin's actions.

He also apologised to Dead Cells' developer Motion Twin. Nowhere in the video does he apologies to Deadite from Boomstick Gaming - the channel he plagiarised from - instead saying that he had "nothing but the best wishes" for the personality and insinuated that this smaller channel had benefited from this whole mess.

Having dodged responsibility for any of his actions, he then decided to throw some shade at Kotaku's Jason Schreier for reporting on the subject and accused the news editor of making up that Miucin had copied yet another review, this time from Nintendo Life for FIFA 19 on Switch.

Playing the 'journalists just chase clicks' card after starting an unwanted conversation about the, sigh, ethics of games journalism is a class move. Nice one.

For what it's worth, evidence of further plagiarism has emerged - as reported by Kotaku - with Engadget's review Metroid: Samus Returns on 3DS having considerable similarities to Miucin's own, which was published five days later.

The video has now been deleted, likely due to the overwhelmingly negative response on social media. That wasn't just from strangers either. Miucin's former colleagues at IGN had some things to say on the matter, too.

Reviews editor Dan Stapleton said: “I haven’t seen an apology this poorly received since Kevin Spacey", adding: "What can I say? Getting stabbed in the back and lied to doesn’t bring out my best qualities.”

The fact that the video was monetised in what can only be described as a desperate cash grab hasn't helped matters, either.

When the tarnished journalist will show his head again is unclear, as is whether he will actually take ownership for his actions.