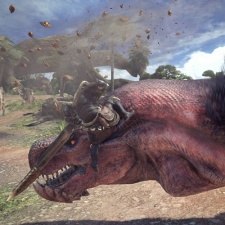 Monster Hunter: World’s second week of pre-purchase marks its second week at the head of the weekly Steam Top Ten.

Pre-orders pushed Capcom’s long-awaited PC port to No.1 last week, and excitement hasn’t wavered since. Monster Hunter: World is due to drop on PC on August 9th, only a little over half a year after its console launch in January.

A recent contender in the hotly-contested battle royale space, Islands of Nyne drops down one space week-on-week to take the No.4 spot this week. So far, the sci-fi survival shooter seems to be carving out its own niche in a genre that’s already taken some high-profile casualties.

With a developer looking for a “cleaner conscience”, Clicker Heroes 2 drops it’s predecessor’s free-to-play model and launched into Early Access last monday with a full $30 price tag. The idle RPG jumps into No.6 this week.

Finally, Enter the Gungeon bursts guns-blazing into the Steam Top Ten this week, picking up the No. 9 spot. The massive, free Advanced Gungeons and Draguns update brings back demand for Dodge Roll’s roguelike shooter.

Below is the Steam Top Ten for the week ending July 21st.

Monster Hunter: World goes live on Steam, settling into a familiar No.1 spot in this week’s Top Ten

Monster Hunter: World lands a killer blow at the head of this week’s Steam Top Ten