Dutch and Belgian CS:GO players can trade again but loot boxes are off-limits 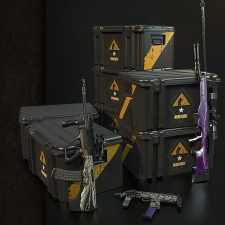 Counter-Strike: Global Offensive item trading has returned in the Netherlands and Belgium at the expense of loot boxes.

Valve placed a barrier in the online shooter in June that barred Dutch players from trading items, whether between friends or on the marketplace. This was part of attempts to meet gambling restrictions placed on the game by the Netherlands’ gambling authority Kansspelautoriteit.

At the time, Valve stated it attempt would “find a solution that is less inconvenient". The latest update to CS:GO has tried to find a solution by reenabling trading and marketplace purchases, but blocking players in the Netherlands and Belgium from buying cases and containers.

These loot boxes contain weapon skins and cosmetic stickers that are popular for resale on the marketplace.

Rather than cutting off item sharing entirely for Dutch and Belgian players, Valve appears to have solved the problem of loot box items being transferable by removing the source of those items - the boxes themselves.

The regulator had threatened to prosecute developers that did not implement changes before a June 20th deadline.

In neighboring France, a regulator recently ruled that loot boxes do not constitute gambling, though it will continue to monitor the situation.