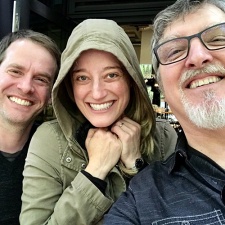 The composer posted a picture of himself (right in picture) with voice actor Jen Taylor (centre in picture) and writer Joseph Staten (left in picture).

The former is best known as the voice of Master Chief's blue companion - and Microsoft's personal assistant - Cortana, while the latter helped write the first three Halo games and spin-off Reach.

He also worked on the first Destiny before a messy departure with the company in 2013 before rejoining Microsoft the following year. Since he has written a number of Halo novels, as well as criminally under-rated 2016 release ReCore.

O'Donnell too worked on Destiny and saw a similarly messy exit from Bungie. The composer had to sue the developer for stock and overtime pay he was apparently owed.

A follow-up tweet from the music man said that the meeting was not random, with another saying the trio missed Steve Downes - the voice of Halo protagonist Master Chief.

All signs point to O'Donnell being involved in the next Halo game, Infinite, which opened up Microsoft's E3 press conference. Little is known about the game other than it looks incredibly pretty and uses developer 343 Industries' Slipspace Engine.