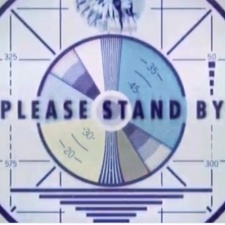 That's according to Bethesda Game Studios director and executive producer Todd Howard who, as reported by the Verge, claimed that the broadcast had hit that viewer figure.

In the run-up to the teaser trailer for Fallout 76 being shown, there was a 24-hour livestream in which, um, not much happened.

For the most part, the broadcast simply featured the 'Please Stand By' and a Fallout bobblehead figure. Occasionally random things would happen, like a disturbing puppet show, boxes of balloons being thrown into the room and a man wandering around drinking coffee. Polygon has collected the 'best' moments from the broadcast.

“We have had over 2 million unique visitors to this stream to watch, I don’t know what, nothing,” Howard said.

Fallout 76 was announced after the livestream though details are still slim, at least officially. Reports point to the game being an online survival RPG project.

Bethesda drops Steam for Fallout 76 launch - has Fortnite given publishers the confidence to go it alone?