Of course there's a school shooting game on Steam 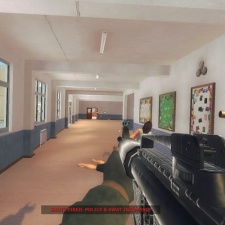 To the surprise of no-one paying attention to Steam, a school-shooting game called Active Shooter is on the platform.

The title, from developer Revived Games, casts players as either an active shooter or a member of the police SWAT team.

The game has come under fire for its subject matter; if you're paying attention to the news coming out of the United States, there's a huge number of real school shootings taking place.

The project has - unsurprisingly - come under criticism. Charity Infer Trust has called upon valve to remove the game, saying that the game is in "very" bad taste.

"There have been 22 school shootings in the US since the beginning of this year," a spokesperson said, as reported by the BBC.

"It is horrendous. Why would anybody think it's a good idea to market something violent like that, and be completely insensitive to the deaths of so many children?

"We're appalled that the game is being marketed."

The game isn't available just yet, and will be on sale from June 6th. The developer has responded to criticism the game has received in a post on Active Shooter's storefront.

"First of all, this game does not promote any sort of violence, especially any soft [sic] of a mass shooting. As I said in the description of the game: 'Active Shooter is essentially a dynamic SWAT simulator in which dynamic roles are offered to players'," the developer wrote.

"Originally when this game started its course of the development, I have planned on having SWAT only based gameplayer. Then I thought about adding more gameplay to it by adding additional roles: of the shooter and the civilian. While I can see people's anger and why this might be a bad idea for the game, I still feel like this topic should be left alone. As I mentioned in steam discussion forums, there are games like Hatred, Postal, Carmageddon and etc., which are even worst compared to "Active Shooter" and literally focus on mass shootings/killings of people.

"I have wrote to Valve regarding this game and waiting for the reply. After receiving such high amount of critics and hate, I will more likely remove shooters role in this game by the release, unless if it can be kept as it is right now."

This is yet another example of Valve being rather inconsistent as to what is actually allowed on its storefront. Some will say that this is no different to other titles inspired by 'real world conflict' such as Counter-Strike or Call of Duty, but the fact of the matter is that this title allows users to mow down civilians in a manner that is surely unsettling considering the current political climate in the United States.

Though we haven't played the game, it doesn't seem like Active Shooter is trying to make any kind of statement to justify this violence, either. Say what you will about Call of Duty: Modern Warfare 2's No Russian level, that was trying to make a point - and also the player didn't even need to shooter any civilians.

Active Shooter rolling onto Steam follows the platform axing adult-themed visual novel games, a decision that Valve has gone back on to re-review the content.

Either way, it's time for Valve to exercise a bit more editorial control over what appears on its storefront. As is becoming more apparent, content is a reflection of the platform it appears on, something that is true for this website, as well as sites like Facebook, YouTube and, yes, storefronts like Steam.

Additionally, this isn't the sort of press that video games need right now, given that our medium is currently being accused of being addictive, gambling and for being responsible for gun crime.