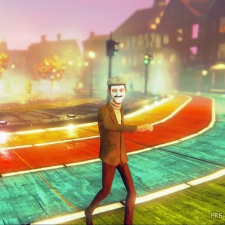 The studio behind upcoming survival game We Happy Few says that it is in discussions with Australia's games rating board after the project was declined rating.

In a blog post on Compulsion Games' website, the developer writes that it has asked for more information on the decision and that it shares the frustration of consumers in that part of the world.

Australia famously has one of the most rigid and strict ratings systems when it comes to entertainment.

"As many of you may know by now, yesterday the Australian Classification Board chose not to classify We Happy Few, effectively banning We Happy Few from sale in Australia," the game maker wrote.

"We are looking into it, and have asked for more information on the decision.

"To our Australian fans, we share your frustration. We will work with the ACB on the classification. If the government maintains its stance, we will make sure that you can get a refund, and we will work directly with affected Kickstarter backers to figure something out. We would appreciate if you give us a little bit of time to appeal the decision before making a call.

"We Happy Few is set in a dystopian society, and the first scene consists of the player character redacting material that could cause offense to “society at large”, as part of his job as a government “archivist”. It’s a society that is forcing its citizens to take Joy, and the whole point of the game is to reject this programming and fight back. In this context, our game’s overarching social commentary is no different than Aldous Huxley’s Brave New World, or Terry Gilliam's Brazil.

"The game explores a range of modern themes, including addiction, mental health and drug abuse. We have had hundreds of messages from fans appreciating the treatment we’ve given these topics, and we believe that when players do get into the world they’ll feel the same way. We’re proud of what we’ve created.

"We would like to respond to the thematic side of We Happy Few in more detail at a later date, as we believe it deserves more attention than a quick PR response. In the meantime we will be talking to the ACB to provide additional information, to discuss the issues in depth, and see whether they will change their minds."

We Happy Few is set to launch this year with Gearbox Studios handling publishing duties.