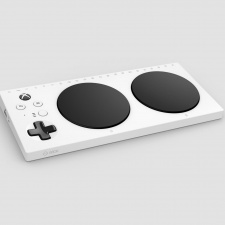 An Xbox controller for players with accessibility considerations seems to have leaked online.

Twitter user h0x0d shared a supposed promotional image (pictured) of the new controller yesterday. This reveal was backed up with more information from Windows Central, alongside claims that the pad will be announced sometime before E3 2018.

There are very few details as of yet, but it’s likely the controller is highly programmable. The front face contains two large buttons mapped by default to A and B buttons, with a number of input icons running along the top.

Microsoft has been putting accessibility under the spotlight in recent years. In April, the company was granted the Helen Keller Achievement Award by the American Foundation for the Blind. AFB cited Microsoft’s significant strides in developing inclusive technologies to empower people with disabilities, through technologies like the Seeing AI app and Windows 10 eye control.

This year, Xbox’s ageing Avatars will see a revamp with particular focus on mixing up the shape and size of players’ digital selves. New customization options are set to include wheelchairs and prosthetics, among generally more varied body shapes. New avatars provide an unprecedented level of awareness, but a more accessibility-minded gamepad is a concrete step towards welcoming more users onto the platform.

Expect to hear more about the new gamepad in the run-up to this year’s E3. The Xbox conference this year will take place at 1pm PT/9pm GMT on June 11th.