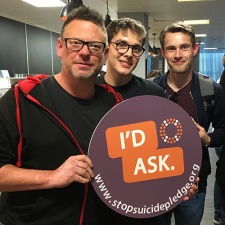 RuneScape developer Jagex has announced tht it has raised a cool £225,000 for mental health charities in the last 12 months.

The firm revealed that its Charitable Giving initiative had raised this sum for three charities; Mind, The Prince’s Trust, and YMCA Right Here. Its goal for this 12-month period was £150,000.

Furthermore, the Cambridge-based publisher has been giving a Silver Award in the Mind's Workplace Wellbeing Index; last year it managed a Bronze.

This is part of Mental Health Awareness week, for which the company is selling an in-game baby yeti item for consumers to raise more money for these charities.

Jagex isn't the only publisher trying to do some good in this field; indie publisher Devolver Digital has been selling a SNES game to this end.

“We’ve had a remarkable first year for Jagex’s Charitable Giving initiative, and I am so proud of the work that we have supported as well as the funding we have raised for our mental health charities," director of customer support and charitable giving Kevin Plomber said.

"Raising £225,000 over the past 12 months is a remarkable achievement and I want to thank everybody involved, from our players to everyone at Jagex – this money will make a difference and literally save lives. Jagex, through our charitable strategy, wants to make a real difference to people’s lives, and we are immensely proud to work with our chosen charity partners to help achieve that.

HR business partner Alice Turner added: “It’s a great privilege for Jagex to be recognised with a Silver Award on Mind’s Workplace Wellbeing Index 2018, which really shows the dedication our company has to support the mental health of our staff. We felt very humbled to be the first games studio to be recognised in the Index last year, so to see that progression and stand alongside some of the biggest organisations in the country as a Silver Award recipient is testament to the continued progress Jagex has made over the past year.”