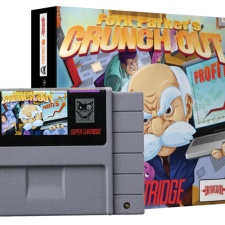 Devolver Digital is working on a new game for Nintendo’s 28 year old Super Nintendo console and aims to give the proceeds to mental health charity Take This.

Fork Parker’s Crunch Out sees fictional Devolver CFO Fork Parker “encourage” developers through crunch-time to release their next title on time. Parker will poke around development floors, making sure workers aren’t slipping behind - using coffee or a light tasing to keep them on target.

The aim of the game is to raise awareness of crunch and mental health.

The title is a joint-development between Devolver and developer Mega Cat Studios. The latter specialises in releasing retro titles on classic Sega and Nintendo hardware.

Crunch Out is available in a standard $50 cartridge, as well as a $150 limited edition with an LED ’monitor’ that lights up while you're playing. The game is region free and should work on whatever version on SNES you happen to keep buried away.

Take This is a US charity centered on providing support and awareness for mental health issues. While few may have an old Super Nintendo lying around, the prospect of a new, playable cartridge for the title should prove a welcome incentive to donate.

Devolver founder Mike Wilson is no stranger to discussions on mental health in the games industry. Wilson is also involved in Take This, encouraging charity collaborations like this.

"Everyone in a position to raise the issue needs to keep raising the issue," he told us. “It's just normalising it all and, again, providing more online resources.”

Fork Parker’s Crunch Out is available to order from Mega Cat Studios now.