Tencent is publishing Robocraft in China 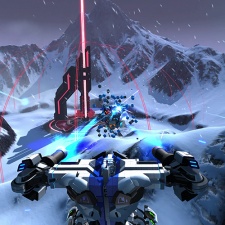 Tech and entertainment giant Tencent is going to be publishing and distributing Robocraft from Freejam in China.

The firm revealed that the multiplayer robot building and battling title will be launching exclusively via Tencent's own WeGame platform. If you're not aware of this, think of it as the company's version of Steam.

"Tencent is one of the biggest and best partners any Western developer can hope to work with in getting their game into the Chinese market, and we're very excited and proud to be working with them on launching Robocraft on a whole new continent." Freejam chief Mark Simmons said.

"Robocraft has already been played by over 13m players worldwide and we're very excited to welcome potentially millions more from one of the biggest video game markets on the planet."

Tencent Games VP Sage Huang added: "We believe Robocraft will not only bring its unique, mixed experience of sandbox and shooting elements to the Chinese gamers, but also broaden our games portfolio in sandbox market.

This is the first deal that we're aware of where a Western title is launching exclusively on WeGame in China.

Robocraft's next beta will be rolling out on May 9th.