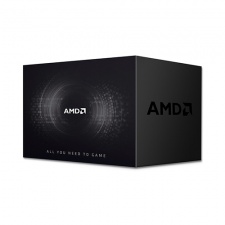 AMD is once again taking steps to get GPUs into the hands of consumers that sure look like ways of discouraging cryptocurrency miners.

The hardware firm has rolled out Combat Crates (pictured), a new bundle which comes with a Ryzen 5 1600 CPU, a Radeon RX 580 OC 8GB graphics card and MSI B350 Tomahawk AM4 motherboard.

All of this will set consumers back $549.

Described as "the ultimate arsenal for gamers", this looks like another instance of AMD trying to combat the cryptocurrency miners who have been inflating demand for - and indeed, the price of - graphics cards in the last few years.

This has made building a PC rather than buying pre-built rather expensive.

Earlier this year, the firm partnered with Ubisoft for the launch of Far Cry 5. Where before these deals tended to involve consumers receiving a graphics card and a code for the game, this time around the firm was pushing pre-built systems from different OEMs. This comes with a higher price tag, which means that people looking to buy GPUs to mine cryptocurrency might be discouraged.

Of course, there is nothing stopping said miners buying the Combat Crate for the GPU and then selling the rest on.

The firm has recently downplayed the importance of cryptocurrency to its business, saying it's just a small portion. That's despite the fact that $776m was spent buying three million GPUs for cryptocurrency mining in 2017, with sales of AMD cards to this end rising eight per cent year-on-year.