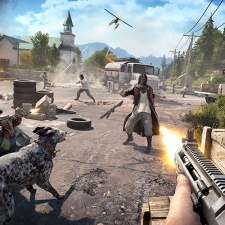 There were some new faces in this last week's Steam Top Ten.

Far Cry 5, which comes out tomorrow (Tuesday, March 27th), moved up from No. 10 to fourth place on presales alone.

Bandai Namco’s Ni no Kuni II: Revenant Kingdom debuted on the charts at No.6. The game was unable to reach a top five spot due to various discounts on Steam.Grand Theft Auto V re-entered the charts as No.3 thanks to a 50 per cent price cut, while Assassin's Creed Origins came in fifth place thanks to having 40 per cent off in a sales event.

Final Fantasy XV clings onto a Top Ten position in tenth place and Counter-Strike: Global Offensive moved places once again, moving down to ninth place. Positions seven and eight are missing from the charts.

The Warhammer: Vermintide 2 Collector’s Edition disappears from the Top Ten, but the regular version of the game and Playerunknown's Battlegrounds remain unshifted from their dominant first and second places in the charts. Warhammer: Vermintide 2 continued to creep up the charts week on week on presales alone, but nothing has been able to shift PUBG from the top since its release in game came out in March 2017.

The Steam Top Ten for the week ending March 25th: