Inside Track - Everything you need to know about Andy Brammall's new venture, Enterprise Games 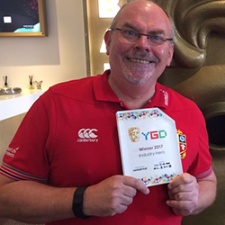 Each week, the Inside Track showcases the best service and support companies operating in the games industry. This week we catch up with Unity veteran Andy Brammall to talk about his new company, Enterprise Games

Enterprise Games is a brand new consultancy company founded in January 2018. We provide help to companies in three areas: business development for studios looking for new contracts or bringing existing IP to new platforms, advice to tools and middleware providers on future business strategy and working with games conferences and exhibitions to source new, relevant content.

At the risk of sounding like an X Factor contestant, the last year has been a journey to say the least. I left Unity Technologies after working there for seven years - I loved the company, the exceptional team I worked with and working with the astonishing community of Unity users. However after all those years, conferences and air miles I felt that I needed a new challenge, which is where the idea for Enterprise Games started to take shape.

I am working with the team at Spirit AI to bring two smart products to the market, Character Engine to help bring believable non-player characters to games and Ally, an AI-based tool for community managers to help safeguard and nurture their communities. After an initial period of working with Spirit AI exclusively, I am now starting to combine this with some new and exciting projects with other companies...which I can tell you about later.

Probably my proudest moment of the year was when BAFTA gave Unity Technologies the YGD Hero prize at the Young Games Designers ceremony in July last year. Unity has supported YGD for several years and BAFTA's initiative to help budding designers and developers bring their ideas to life is something very dear to my heart. Another, lesser personal success was finally working out how to hit a golf ball up in the air!

What challenges are facing your sector of the market?

Tools and middleware providers face similar cyclical changes over time as the industry as a whole, mirroring the change in the balance between triple-A and internal teams to independent studios. In my 15-plus years plus in the tools industry this has gone from where engine providers dominate the market - Renderware and then Unreal Engine 3 to a time when smaller tools providers contributed significantly - Havok, NaturalMotion and so on - then back again to engine provider dominance - such as Unity and Unreal Engine 4. These swings are normally matched by new platforms being released (console generations and the explosion of mobile) and also the change in business models for the tools providers or new routes to markets (digital distribution of games) Unity is the classic example of a new business model that others have had to follow.

I think that the tools business is evolving again where commercial engines are easily available and affordable and they provide a truly comprehensive set of tools and services for making games. However, there are new areas of technology where niche providers can be successful, such as AI/machine learning based systems, and tools for VR and AR.

I think the freedom for people to tell stories in games, rather than just shoot them. Some of the games I have most enjoyed playing over the past couple of years have been story based, including Firewatch, Night in the Woods, Blackwood Crossing and Tacoma. However, the one that I was most taken by was What Remains of Edith Finch, with some stunning design and great artwork. There were three or four moments in the game where I just found myself sitting back with a huge smile on my face, reflecting on what I had just seen. Giant Sparrow is ridiculously good at doing this, The Unfinished Swan had the same effect on me when I played it a few years ago.

I'm also really looking forward to Red Dead Redemption 2 which allows me to enjoy a great story AND shoot people in the face - awesome.

How did you choose your name?

Star Trek has been a key part of my life for over 50 years - I remember watching the first episode on TV in 1967 and even what I was eating at the time. I have children named after characters and was even able to get a Star Trek-themed presentation - Virtual Storytelling: The Final Frontier - accepted at the Slush conference in Iceland 18 months ago.

My friends at Unity knew of my sad obsession and when I left they made me an astonishing video I will treasure for ever.

Pretty simple really - to be still in business at the end of the year. Branching off on my own is an obvious risk but the personal satisfaction and variety of work I am involved in has been really rewarding so far.

You can reach Enterprise Games here.

Are you a service or support company in the games industry that wants to be featured in the Inside Track? Email [email protected]!