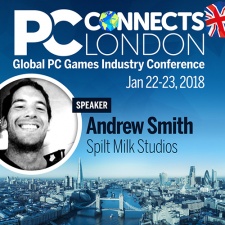 Andrew Smith of Spilt Milk speaks to us about his talk in the PC Games University track at the show, which is all about making MMOs as an indie studio

Tell us a bit about who you are and what you do?
My name's Andrew J Smith, I'm a game designer who founded Spilt Milk in 2010 and has never looked back. We've won a few awards, released a few games, and are currently hell bent on releasing Lazarus to Early Access on Steam as soon as is sensible.

What are you going to be talking about at PC Connects London 2018?
I'll be talking about how on earth a tiny team of indies can make an MMO. I'll touch on game design, the tech behind the game, how we approached recruiting and managing the team, the highs and lows of the development process so far - all of it from beginning to 'now'.

What was your favourite PC game from 2017 and why?
Total War: Warhammer 2 was my favourite. Well, if you combine it with the first and get the uber campaign it is. It's the game that teenage me has been dreaming of for years and years. The IP and the team are a match made in heaven, and they've totally delivered on all fronts. It's a masterpiece.

What do you think are going to be the biggest trends and releases of 2018 for PC?
We'll see a ton of 'battlegrounds' games get announced or come out - the next big one will be fantasy-themed, mark my words. Most of them will fail to really make an impact. I also think we'll continue to see one or two massive hit games come from studios nobody's heard of, or from first-time game developers... but we'll see more and more developers close too. Competition is fierce right now - you have to know your niche.

What are you most excited for in the PC games market right now?
We're in the part of the cycle where anyone can make a game, and that means only the best at making, releasing, marketing and supporting a game will survive to have another go. It'll be really interesting to watch a lot of successful independent devs choose between lifestyle and business. Lifestylers will be talking at all the shows, and the rest will have a shot at becoming the next big company... or being bought out.