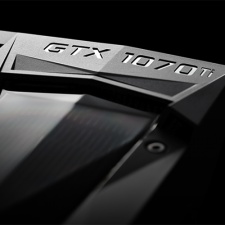 Nvidia has confirmed the existence of the GTX 1070 GTX Ti cards, and that they are launching on November 2nd.

In a blog post, the firm revealed that the new tech comes with a $449 RRP, and is a fit between the GTX 1080 and 1079 GPUs in Nvidia’s line-up. The vanilla Founders Edition is available to pre-order at this price now, with GPUs from other OEMs on the way shortly.

Shipping for the card begins November 2nd across 238 regions with the likes of Asus, Gigabyte and Zotac also supplying the hardware.

The card is said to work with DirectX12, HDR and VR, with Nvidia namedropping Destiny 2, Shadow of War, Star Wars Battlefront 2 and - of course - Playerunknown’s Battlegrounds as games it will support.

As pointed out by MCV, rumours that Nvidia was trying to put overclockers off appear to be false, with Nvidia saying in the announcement that: “We designed the GeForce GTX 1070 Ti to be an overclocking monster with plenty of headroom for gamers to crank up the clock speeds. And our partners have built cards with thermals and power supplies that allow gamers to push performance way past stock specifications.”

Sega has invested in an Indian music startup