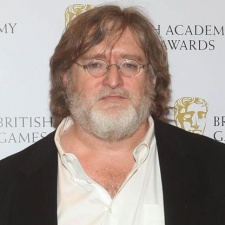 The worth of Valve founder Gabe Newell has reportedly increased by a cool $4.1bn over the course of 2017.

That’s according to Forbes' Top 400 list, which places the game exec’s net worth at $5.5bn. If this information is correct, then he has added $1.4bn onto his value since the same publication estimated his worth at $4.1bn.

Newell comes in a 97 out of 400, and is the only member of the games industry to make it on to the list.

The publication notes that his wealth is mostly ‘self made’, with the exec boasting a ‘self-made score’ of 8, which means he is ‘Self-made who came from a middle- or upper-middle-class background’.

The exec is rumoured to own half of Valve, which he set up with fellow Microsoft veteran Mike Harrington, in 1996.

Having risen to fame as a game developer behind the likes of the Half Life and Portal series, Valve is best known today as the company behind games retail storefront giant Valve. It still has its fingers in game developer, releasing popular MOBA DOTA 2 in 2013.