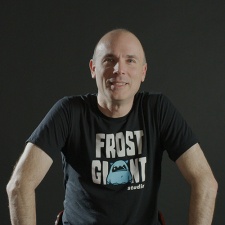 The former Blizzard devs at Frost Giant Studios have attracted another $5 million in investment and brought on board some top talent.

This funding came from Korean VC fund Kona Ventures, Global Founders Capital, the co-founder of Rxbar nutrition bars Jared Smith, as well as games entrepreneur Eden Chen. It comes in the wake of the $4.7 million that Frost Giant raised when it was established in October 2020.

As well as huge stacks of cash, the studio has also attracted James Anhalt (pictured), formerly the lead engineer on the iconic RTS title StarCraft 2. He joins Frost Giant as chief architect, having previously also worked on Battle.net and World of Warcraft during his time at Blizzard.

“I am excited to work with this outstanding and talented team to bring fun RTS gameplay to as many fans as possible,” Anhalt said. “Frost Giant’s strong foundation gives us the ability and opportunity to create RTS games that appeal to more players than ever before.”

Frost Giant CEO Tim Morten added: “With over 30 years of experience building games, James is one of the most talented engineers I’ve worked with, and he will be integral to our continued growth. With his leadership and depth of knowledge, I’m confident that Frost Giant will be able to set a new benchmark for RTS games."