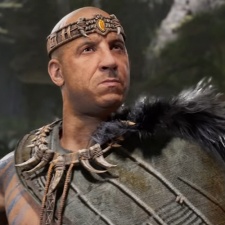 Hollywood actor Vin Diesel is not only appearing in the upcoming Ark 2, but he is also apparently working on the game.

In a release from the developer, it said that Diesel has joined Studio Wildcard as an executive producer for Ark 2, as well as an animated series based on the survival IP that's set to launch in 2022. Diesel is also the company's, um, president of creative convergence. Whatever that means.

“Being able to mix together fantastic characters from throughout human history is one of the unique joys of telling stories within the Ark universe," studio co-founder Jeremy Stieglitz said.

"But more than that, this series is a deeply personal narrative about love and grief, and the ways in which those two most-powerful emotions manifest in different people. Plus, of course, taming and riding dinosaurs!”

Co-founder Jesse Rapczak added: “With Ark we’ve always looked for new ways to tell the story. The animated series brings together some of the most talented directors, actors, and animators out there to finally depict on-screen this franchise’s epic narrative.”

This isn't the first time that Diesel has been involved in video games. Back in 2002, he founded Tigon Studios, which worked on titles, which have mostly starred Diesel. These have included The Chronicles of Riddick titles, Escape from Butcher Bay and Assault on Dark Athena, as well as Fast & Furious: Crossroads.

Ark 2 was announced last week at The Game Awards.