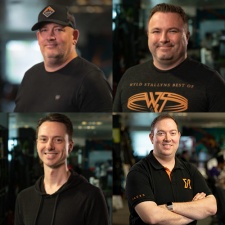 Cambridge, UK games firm Jagex has snapped up yet more industry vets as it continues expanding.

Ward previously worked at Blizzard as product director for Overwatch, having held similar roles at Epic Games, Nexon, CCP, BioWare and LucasArts in the past. Meanwhile, Hendy's career kicked off at Warthog Studios working on Starlancer, going on to head up mobile studio Ideaworks and NaturalMotion's London office.

Meanwhile, Gavin Irby (pictured, bottom right) has been hired as creative director from Destiny 2 maker Bungie where he was design lead.

"The huge talent we’ve managed to capture from across the industry, in development of course but across all parts of the business, is just one of the many highlights of 2019," CEO Phil Mansell (pictured, bottom far right) said.

"As well as hitting a number of records for RuneScape in its 19th year, the success of Old School Mobile on iOS and Android has been awesome, pioneering the full MMO experience on mobile, achieving more than 8million installs, and winning both BAFTA and Develop awards. We are confident we can build on that with the launch of RuneScape Mobile, which launches in Early Access later this year.

“Thanks to all of this and the ongoing support of our amazing community and the new players coming into the RuneScape world, we’re excited about the future of RuneScape and confident in the teams at Jagex to continue building a great place to work, not just in the games industry but in any industry, anywhere.”