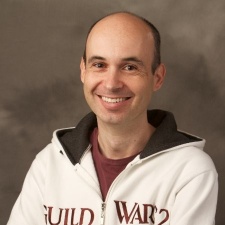 The co-founder and president of Guild Wars firm ArenaNet Mike O'Brien (pictured) has announced his departure from the company.

In a post on the Guild Wars 2 website, O'Brien said that he was leaving to set up a new studio next week with the intention of returning to making smaller projects. Guild Wars 2 game director Mike Zadorojny appears to be replacing O'Brien at the top of the firm.

The Guild Wars 2 director role was one that O'Brien himself once held but moved away from two years ago in order to work on new projects.

"We couldn’t have known then the extent of the journey we were embarking on or all the wonderful and talented people who would join us along the way," O'Brien said.

"For the past two decades we’ve gotten to work with brilliant developers and advisors, we’ve enjoyed an amazing relationship with the Guild Wars community, and were able to pursue the games of our dreams.

"I’ve appreciated every moment of it. But the time has come for me to take a step back. Next week I’ll join some of my friends in forming a new studio. We’ll go back to the beginning and make small games again."

Zadorojny added: "I want to personally wish Mike the very best in whatever is next for him. Though he is leaving the studio, his presence and legacy will always be a part of the team, and I am going to make sure I do everything I can to keep the torch he passed me burning brightly into the future, both for the Guild Wars franchise and ArenaNet itself. I am looking forward to continuing this journey with all of you."

O'Brien's departure follows ArenaNet laying off 143 members of staff - roughly a third of the studio's headcount - earlier this year. The firm has said that Guild Wars 2 was unaffected by this job cull.