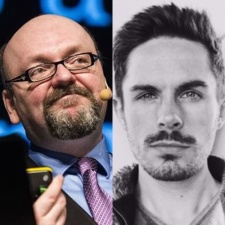 According to GamesIndustry.biz, the new development studio is located in Melbourne, Australia. Summerfall Studios was founded in October 2018 by Gaider and MD and fellow Beamdog alum Liam Esler (far right).

Gaider previously worked at Bioware for just under 17 years, starting as a senior designer in 1999 before being promoted to senior writer in 2007. He left the Dragon Age and Mass Effect maker at the start of 2016. Following this, Gaider took the role of creative director at Beamdog for two years.

Fellow co-founder and studio MD Esler was at Beamdog for a total of three years, first as a lead scripter and writer, then as an associate producer. Esler played a crucial role in bringing GaymerX to Australia and organising Game Connect Asia Pacific.

On Twitter (below), Esler revealed that information on the studio's first project would be released on October 10th at PAX Australia. The game is being partially funded through a Kickstarter campaign.

“There’s so much we can’t wait to talk about. The people working with us are phenomenally talented. And honestly, I’ve never worked on a project I’ve been so passionate about. I really hope everyone gets as excited about it as we are.”