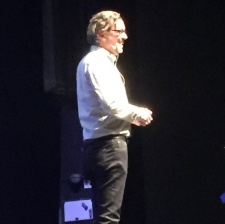 Fortnite developer Epic Games is set to open a new branch in New Zealand and Australia.

The move was revealed by the Game Developers' Association of Australia CEO Anthony Reed at the end of the Games Connect Asia Pacific during the Melbourne International Games Week.

Reed also told the crowd in a tearful speech that he would be stepping down from his role to focus on Epic Games’ new branch, which he helped set up.

More details are set to follow in the coming weeks.

In his place as the head of the GDAA will be interim CEO Melissa Lancuba.

“The GDAA itself is going in an amazing direction with a whole new amazing strategic plan and it’s going to have new eyes to lead and serve you,” said Reed.

“Melissa Lancuba will be taking over as interim CEO after my departure in a couple of weeks. I am extraordinarily proud of the work that I’ve done, but most of all I’m proud of you.

“Because you came from the worst of times, and you built an industry that the world takes notice of.”