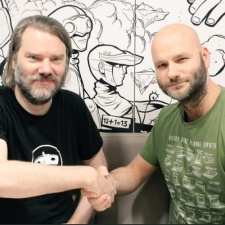 Around one year after Bossa Studios announced that it had hired Valve vet Chet Faliszek (right), the developer left the company.

Speaking to PCGamesInsider.biz about the developer he is launching with Riot Alum Dr Kimberly Voll Stray Bombay, Faliszek said that the AI-driven narrative project that he was working on with Bossa simply wasn't working out but maintained that things are still friendly between himself and the London-based game developer.

"We were at our year anniversary and we all talked about where we thought it was going and how it was working out," he said.

"I just don't think it was quite the right match. Bossa is great; I love them. It was the most cordial breakup of making sure that everybody was okay and helping each other the best we could. I even joked with Henrique that I wish I could just swear at him because it would be easier; everything going okay is much more hard work. I take a lot of notes, I track progress and see where things are so I can have a good perspective on it and I brought some stuff up and we talked it through and it just wasn't good for either side. We decided to break-up."

Pressed as to whether the project that Faliszek and Bossa were working on was still in development, the developer said that Bossa was the one to speak to about that. We've reached out to them for comment and will update this story with any extra information.

Bossa announced that Faliszek was joining in September 2017. We caught up with the developer last year to discuss how AI could be used to improve in-game narrative.

The co-founder declined to comment on the project that Faliszek and Bossa were working on together, but echoed the Valve vet's comments about the split being amicable.

"I have nothing official to say about that Bossa project at this time," Jele told PCGamesInsider.biz.

"I can tell you that there isn't any drama here. We are constantly trying innovative ideas at Bossa for new games and for new ways of making games. And of course many of them will not see the light of day. The collaboration with Chet didn't get the momentum we were hoping for so we decided to part ways. It's all been amicable and a very cordial separation.

"Above all, Chet is a friend. And we are excited about how his new venture both as players and as fellow developers."